CLP casepacker in a high-performance slaughterhouse

Together with another location, Emsland Frischgeflügel produces a third of Germany's fresh chicken meat. The packaging technology for the high-performance slaughterhouse has to meet special requirements: function without problems in the cold, achieve high performance and meet demanding hygiene standards. A case packer from the Netherlands manages all of this with flying colours.

Emsland Frischgeflügel is a subsidiary of the Rothkötter group of companies. The origin of this group was the Rothkötter Mischfutterwerk. The group of companies now covers the production chain from parent animals to slaughter. In 2003, the Emsland Frischgeflügel production facility was built and put into operation in the industrial area at the Eurohafen in Haren. In 2007 the company was expanded to include a second slaughtering and cutting line. Richard Wenneker, Operations Manager at Emsland Frischgeflügel, explains: "The cutting lines were planned in such a way that after cutting, the chicken parts are placed inline on trays and packaged for the retail end customer."

With the commissioning of the Celler Land Frischgeflügel production facility in Wietze near Celle in September 2011, the meat producer has further expanded its production capacity. "The development of the chicken market and the possibility of opening up a new large procurement market have prompted us to set up a production facility in eastern Niedersachsen, which conceptually corresponds to the operation in Haren," explains Wenneker. A total of 3.2 million chickens are slaughtered each week. The daily output of the three production lines is over 500,000 chicken packs. "Only a small proportion of the slaughtered chickens leave the company without being cut up," says Wenneker. "Due to the uniform anatomy and the technical development based on it, the cutting of the chicken is largely automated." The majority of the goods are manufactured for the self-service counter in food retail. Wings, fillets and legs products are cut on different modules running one behind the other and placed on belts. It takes between six and eight minutes to cut up a complete chicken. The cut pieces are weighed, portioned and placed in bowls by hand. In the case of fillets, this task is carried out by a pick-and-place robot, which portions the fillets into the shells to the exact weight. The product range also includes variously seasoned products for grill plates,” Spieße aus Innenfilet”, “Grillfackeln made from thigh meat, “Minutenschnitzel” made from fillet, oven dishes or unseasoned chicken parts such as goulash or sliced ​​​​meat. The main season in the processing department is the barbecue season from just before Easter to the end of September.

Most of the products are packed in MAP trays. In order to pack these into cardboard transport trays, the poultry specialist used to use delta robots as a pick-and-place system. "This solution was very complex but also highly flexible," says Frank Hausdorf, head of the packaging department. "But we don't need this flexibility at this point on the packaging line. For this reason we were looking for a simpler alternative to the pick and place system. The challenge was to pack the bowls into a ready-folded carton. However, this carton has flaps in the corners at the top, which made it impossible to place the trays in the carton in the conventional way.”

With just one linear movement

So Hausdorf looked around for a better solution and struck gold with the Dutch specialist for case packing systems, Case Packing Systems (CPS) from Stramproy. The replacement for the delta robotic solution was to be a pick-and-place system that only worked with a linear movement. These machines from the case packer specialist are specially designed for depositing trays and bowls. Flexible and semi-flexible bags of various sizes and dimensions can also be placed in crates, cartons or trays. "Here, CPS offered a simple linear solution," says Hausdorf. "Because the suction head can be pivoted and the outer dimensions are reduced as a result, it can place them in the box." The case packers are specially designed for these requirements and are now in use worldwide.

The machine currently packs D2 trays measuring 190 mm x 144 mm in either two or three layers in cardboard trays. "If we want to pack other tray and carton sizes on the machine, we can program it ourselves using the very easy-to-use control," says Hausdorf. The operator can either program the control via question and answer or copy an existing program and make the appropriate changes there. Hausdorf makes it clear: “The big advantage of the machine is that the side, case and compression guides are servo-controlled. The packing patterns that I program determines the setting of the machine. I don't need to tools on the machine."

There is also a service menu in the control. There, a technician can test individual components for correctness by entering the component number attached to the end user. Then he can, for example, test a light barrier, a sensor or a motor to ensure that it is working properly. The ready-to-operate lamp mounted above the machine then shows him whether the sensor switches and is therefore in order. "Our engineering department was thrilled," says Hausdorf. “You can see that CPS has thought of everything. Everyone can work with and on the CPS machine.”

In production, the trays come from the sealing machine to the case packer. The system's feed system rotates each tray individually into the desired position. This allows a variety of packing patterns to be formed. After four trays have been positioned, they are picked up and held by a vacuum gripping system. The retract belt below is pulled back and provides a free access to the tray underneath. The vacuum gripping system moves down. The vacuum gripper swivels 45 degrees so that the trays come under the flaps of the box. The gripper folds back and places the trays in the container. The gripping system moves up again and the conveyor belt returns to its starting position. The packaging capacity is up to 120 trays per minute. "Since the products are only moved vertically, this system works extremely reliably with a high level of efficiency," says Hausdorf.

The machine is designed as a plug-and-play system: set it up, connect the power and air, and the machine runs. The system meets the special hygiene requirements of the slaughterhouse thanks to the high-quality stainless steel design and he use of hard-anodized aluminum components. In addition, the machine is designed in such a way that the electronics and servomotors are built into the frame at the top. This makes it particularly easy to clean. "We clean the production halls and machines with high pressure," explains Hausdorf. "That means everything that is close to the ground is particularly exposed to the cleaning agents and the water jet."

CPS was so convinced of their system that they gave Emsland Frischgeflügel the machine for a three-month test period free of charge. "We were convinced after half the time and bought the machine," says Hausdorf. 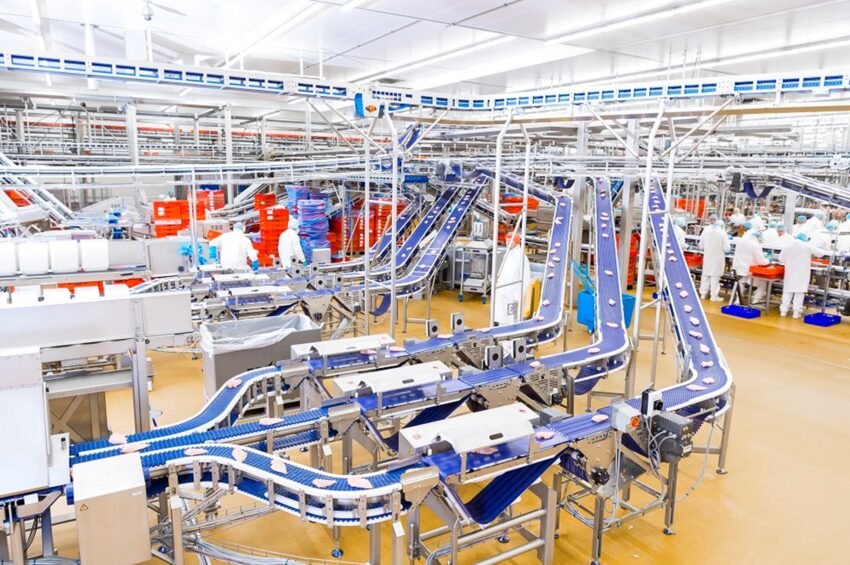