First blueberry casepacker in the Netherlands

Hortiblue was founded in the Netherlands in 2018. It is a subsidiary of and packaging facility for Hortifrut Chili, the market leader in supplying South American blueberries. Hortiblue sorts, packs, and distributes soft fruits, focusing on blueberries.“We want to keep the chain as short and efficient as possible," begins Director Timo Elbers. “There's added value in controlling the entire chain from cultivation to delivery and retailers. Every extra link has to be coordinated. That doesn't help get these berries, in good order, to consumers as quickly as possible." Processes are also becoming increasingly standardized and automated.Parent company, Hortifrut, keeps growing by expanding its farms and via strategic takeovers. "In 2021, they acquired Atlantic Blue in Spain. That means we'll be packing more in the Moroccan season too," says Timo.Three years later and Hortiblue is well on the way to fully utilizing its site's capacity. "We can continue here for a while, but if we keep growing like this, we'll have to relocate within a few years." Distinctive quality Besides the Hortifrut volume, Hortiblue packages soft fruit for other growers and importers too. "We focus on offering high service and great flexibility. It's enormously challenging to balance an optimal result for growers and ensure quality for retailers and end consumers. We want to constantly do better. Many of our clients appreciate that," Timo explains.

The ever-growing blueberry market is still developing tremendously. To satisfy people, market demands are becoming stricter." For example, the retail sector has blueberry origin, size, and variety requirements. Operations Manager, Asia Wasilewska, says new, improved varieties are slowly replacing those that score lower in, say, flavor or shelf life. The Hortifrut Group is also developing unique, even better varieties. "Hortifrut does this to market a consistent product from all origins throughout the year. I think this development will eventually move us toward selling a recognizable premium, branded line," Timo says.“You can distinguish yourself in blueberries' quality, but certainly also in its packaging material," adds Asia. Blueberries often used to arrive pre-packaged for consumers in clamshells; now, packaging is becoming more and more varied. "Currently, films are mostly used instead of lids when packaging blueberries and other soft fruits. That reduces the total plastic volume," explains Timo. Consumer packaging is getting larger too. "That's because prices are under pressure; increased supply means the average price has fallen in recent years." Also, many retailers want to use personalized packaging. "They want to use this to distinguish themselves or have different ideas about packaging blueberries," Timo continues. Using cardboard and paper pulp as packaging materials is another packaging trend. All these different kinds of packaging mean blueberries are increasingly being packaged locally. And at the last minute, rather than in the country of origin. "That's simply not possible anymore." This season, Peru and Chile will deliver 90% of their blueberries in bulk. "We package as last-minute as possible, so we can much better guarantee the berries' quality," says Timo. In Peru and Chili, Hortifrut harvests the berries in bulk in crates. So they are touched as little as possible, and the quality remains optimal. "After cooling the berries to 0°C, they can make the weeks-long ocean voyage trip without losing any quality." 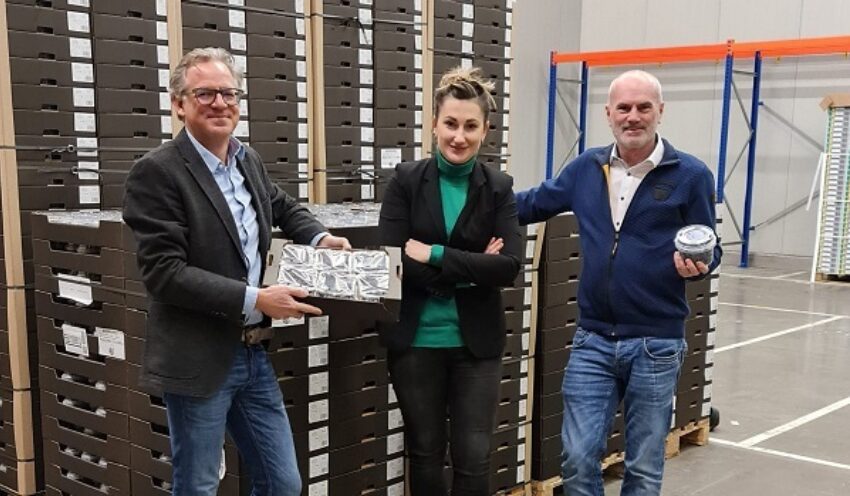 We've invested heavily in five packing lines in recent years. These have the latest camera technology-based sorting machines, heat sealing, and labeling equipment. We keep innovating and want to be technology leaders," says Asia. "We're gradually automating the whole packaging process, so we need fewer people on the lines." "There was, however, a bottleneck at the line's end, where three or four operators would be packing trays into boxes. That's where we saw opportunities and why Case Packing Systems (CPS) came into the picture. Their case packer is this final piece of our automation," Asia explains.

CPS has experience in the meat and fresh produce - potatoes, onions, carrots, tomatoes, and grapes - markets. They have automated the packaging of bags and trays into boxes and crates in those industries. However, the project at Hortiblue is the first time doing so for blueberries. "Hortiblue is the first company in the Netherlands to automate this part, and this fragile soft fruit makes particular demands on the process. Our technology lets the machine pack blueberries and other soft fruits undamaged," Henri says.

It is clear to Hortiblue that automating this process results in reduced costs. "We've, undoubtedly, achieved the expected savings, but the case packer also makes the shopfloor much calmer. You need fewer people for the process, and it's now a more stable running process. The personnel numbers reflect the automation steps we've taken: we are packing more and more with fewer people," says Asia.

This far-reaching automation ensures the process is less dependent on human input too, so the whole packaging process capacity can be optimally used. And that is seen in the costs, an important aspect for CPS. "Our starting point is that customers can use the system to make money. If return-on-investment takes too long, the solution isn't good enough; then we develop it further," concludes Henri.